Report
Trust in the United Nations

United Nations more trusted than any other governmental organization

Amsterdam, Netherlands and New York, NY | Monday, November 30, 3020 – In the year 2020, in which the United Nations celebrates its 75th birthday, half of the world population (47%) trusts the UN and only 29% do not have trust in the UN. This is a substantially higher level of trust compared to the trust that citizens have in other (inter)governmental institutions such as the EU (38%), NATO (35%), government (31%) or parliament (26%) in general. Among young people (18-24) the UN trust is highest (50% trust and 25% distrust). These are the outcomes of a survey in 25 countries that was conducted by international research agency Glocalities between January 23 and March 13, 2020 among 26,775 respondents. The study is released in cooperation with international advocacy organization Global Citizen, the world's largest movement of action takers and impact makers dedicated to ending extreme poverty by 2030.

Martijn Lampert, Glocalities Research Director said, “The high level of trust in the United Nations mirrors the energetic and cooperative mindset of its supporters. These people transcend the often paralyzing polarity between nationalism and globalism. In times of urgent international crises such as the COVID-19 pandemic, rising poverty levels, climate change and famines the survey results reveal an ample opportunity for countries, leaders and citizens to again work together coherently to solve these crises. People recognize that the world needs to live up to the ideals of the UN collaborative platform that was founded upon the ruins of the Second World War.’’

Michael Sheldrick, Chief Policy and Government Affairs Officer for Global Citizen continued,  “Relatively high levels of trust in the UN demonstrates the awareness citizens around the world have that global challenges - from the COVID-19 pandemic through to ending poverty - can only be solved through global solutions. For far too long though citizens’ high level of trust in the UN has, on the whole, not been reciprocated in the support of their respective governments. In order to Recover Better Together, governments should acknowledge the trust placed by their citizens in the UN and ensure that its global recovery efforts are fully funded. Ending the worst of the pandemic for everyone alone requires US$35 billion, which is but a fraction of the trillions G20 governments have spent on stimulating their economies.”

For further reading regarding our international survey, including a historical comparison with the founding period of the UN and potential implications for the incoming Joe Biden administration, there is also an additional Forbes article written by Michael Sheldrick, which can be read here.

People who trust the UN have a positive, energetic and determined mindset. The explanation of trust in the UN is much more layered than often is thought. While the UN is sometimes attacked as a ''globalization elite'' project, this is not reflected in its international support base. Trust in the UN is not explained by a globalist - nationalist polarity, but by citizens being proud of their own country while recognizing the interdependence of nations that need to cooperate in a challenging international environment. While the USA is often seen as the world leader by commentators, trust in the UN (47%) is much higher globally than trust in the USA (27%).

The Ban Ki-moon centre also shared our research on Twitter. The full statement of its founder, UN Secretary General (2007-2016) Ban Ki-moon, can be found below.

Ban Ki-moon, UN Secretary General (2007-2016) when the Paris Climate Agreement and the Sustainable Development Goals were installed said, "75 years after the establishment of the UN, the results of the Glocalities survey from 25 different countries reflect two very important assessments. Firstly, they resonate that the challenges of our time, climate change, discrimination, and human rights violations, are significant concerns at the heart of local, national, and international communities. Secondly, it reveals that people who trust the UN, recognize it as a multilateral entity that unites the values of human rights, human dignity, peace, and education. I am encouraged to see that a majority of the world believes in the UN's mission and progress through international cooperation. Especially today, this belief and hope are crucial to overcoming the current global crisis of inequalities and weakened multilateralism. This trust is the way forward to our one common goal: the formation of an equal, just, and sustainable future for all." 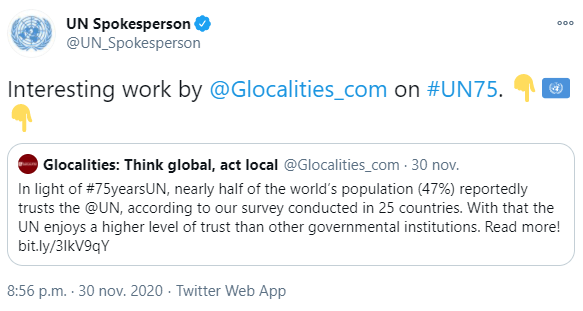 Using a values based research methodology the Glocalities survey provides deeper explanations for (dis)trust in the UN. People who trust the UN consider networking important and have faith in technological progress. They believe businesses have a social responsibility, are concerned about humans causing damage to the planet, are proud of their nation’s flag and feel involved in their local communities. People who trust the UN hold tolerant views towards other religions and belief systems. ​

The survey found that trust in the UN is partly an expression of ‘’bigger picture'' thinking and a cooperative instead of a competitive mindset, which is essential for working together across cultures. People who do not trust the UN tend to be more disillusioned, pessimistic and nostalgic in their orientations. They feel disconnected, feel let down by society, say that life in the past was easier to manage and experience a lack of perspective.​ People who trust the UN experience positive emotions more often instead. They thrive emotionally and feel determined, active and inspired.

Samuel Zipp, Associate Professor of American Studies at Brown University and author of The Idealist: Wendell Willkie’s Wartime Quest to Build One World said, “Seventy-five years ago, at the end of World War II, millions across the globe looked to the United States to lead the world to a new era of peace and freedom. Polls in the U.S. showed that as much as 90 percent of Americans favored U.S. participation in a new international organization. Today, at another time of global crisis, the situation is reversed. Few Americans trust the United Nations, while across the globe trust in the UN far outpaces trust in the US. This should be a wake up call for Americans--and the new Biden administration: after the Cold War, the War on Terror, and the second coming of America First, the world is waiting for the U.S. to join them in confronting pandemics, inequality, and climate change.”

The full survey report is available for download on the right.

Reaction by Samuel Zipp, Associate Professor of American Studies at Brown University and  Author of ‘The Idealist: Wendell Willkie’s Wartime Quest to Build One World’

Missed the press presentation? You can find the full conference here

The survey was conducted by Glocalities among 26,775 respondents from 25 countries between January 23 and March 13 2020. These countries are: Australia, Belgium, Brazil, Canada, China, France, Germany, India, Indonesia, Italy, Japan, Mexico, Netherlands, Poland, Portugal, Romania, South Africa, South Korea, Spain, Sweden, Turkey, UK, Ukraine, USA and Vietnam. In almost all countries, except for the Netherlands, the survey was conducted through the online research panels of Dynata, an agency that specializes in international fieldwork. In the Netherlands, the fieldwork was conducted by Motivaction, the Dutch sister company of Glocalities.​ Prior to the data collection quotas for age, education, gender and region were set up, based on reference data for each of the 25 countries. The Glocalities samples are weighted according to census data with respect to age, gender, region and education as described in the report.

Glocalities is an Amsterdam-based international research agency that specializes in values and lifestyle research all over the world. The Glocalities research program, that started in 2014, now covers 32 countries based on interviews with more than 228,758 people. NGOs, national and international companies and the public sector use Glocalities insights to connect with audiences, based on a deep understanding of trends, people and cultures. Glocalities research consultants provide international insights through the online World of Glocalities Insights Solution and in workshops, presentations and reports. Free reports on a multitude of topics such as the Sustainable Development Goals are available on our website. For more information, visit glocalities.com.

Global Citizen is the world's largest movement of action takers and impact makers dedicated to ending extreme poverty by 2030. With over 10 million monthly advocates, our voices have the power to drive lasting change around sustainability, equality, and humanity. We post, tweet, message, vote, sign, and call to inspire those who can make things happen to act — government leaders, businesses, philanthropists, artists, and citizens — together improving lives. By downloading our app, Global Citizens learn about the systemic causes of extreme poverty, take action on those issues, and earn rewards with tickets to concerts, events, and experiences all over the world. To date, the actions of our community, along with high-level advocacy efforts and work with partners, has resulted in commitments and policy announcements from leaders valued at over $48 billion, affecting the lives of more than 880 million people. For more information, visit globalcitizen.org.

Global Citizen, This email address is being protected from spambots. You need JavaScript enabled to view it.

Sunshine Sachs on behalf of Global Citizen, This email address is being protected from spambots. You need JavaScript enabled to view it.

Martijn Lampert, Research Director Glocalities, This email address is being protected from spambots. You need JavaScript enabled to view it.